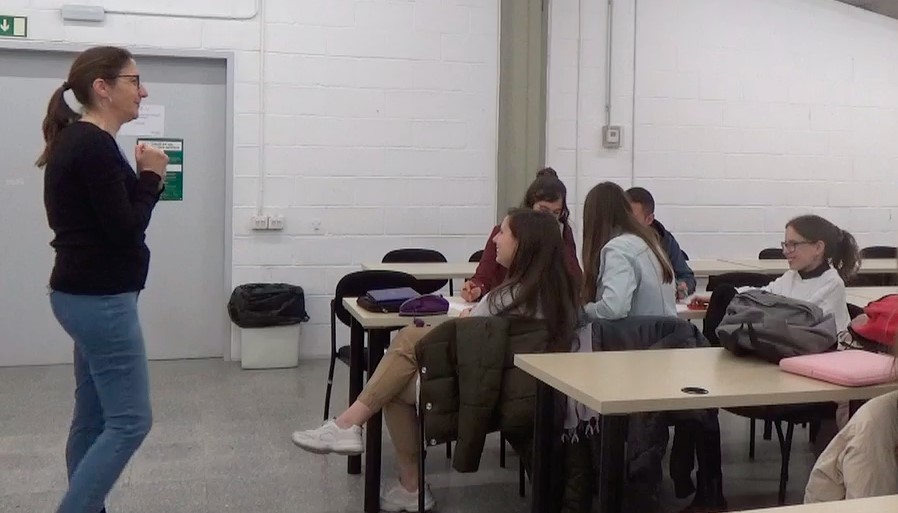 Collaborative understanding of LST for ITE: Notes from the fieldwork

Catalonia has a long tradition of managing school plurilingualism –in the two co-official languages (Catalan and Spanish) and curricular foreign languages (English, mostly)–, but the arrival of many students from different countries over the past two decades has demanded change.

In a first phase of adaptation, the Catalan Government promoted a Linguistic and Social Cohesion Plan (2004) which aimed at helping students from diverse backgrounds to learn Catalan following a linguistic immersion approach and also at ‘integrating’ –the term used in the document– migrant origin students in order to promote social cohesion and equal opportunities for all. In more recent years, the Catalan Government passed an Inclusion Law (2017) and a new framework for linguistic diversity in the schools. These two key documents present schools as multilingual and multicultural spaces shared by many people and, therefore, a plurilingual and intercultural education is promoted.

Our institution, Universitat Autònoma de Barcelona, has adapted initial teacher education (ITE) degree plans and added new subjects in order to respond to the curricula for early childhood, primary and secondary education, other framework documents and to the sociolinguistic reality of the schools. In adapting the former ITE program to transform it into a Bachelor’s Degree –following the Bologna Plan– in 2009, a subject on School Language Policy and Plurilingualism was added for all pre-service primary school teachers and an elective subject on Linguistic Reception in Schools was opened for pre-service early childhood and primary school teachers. 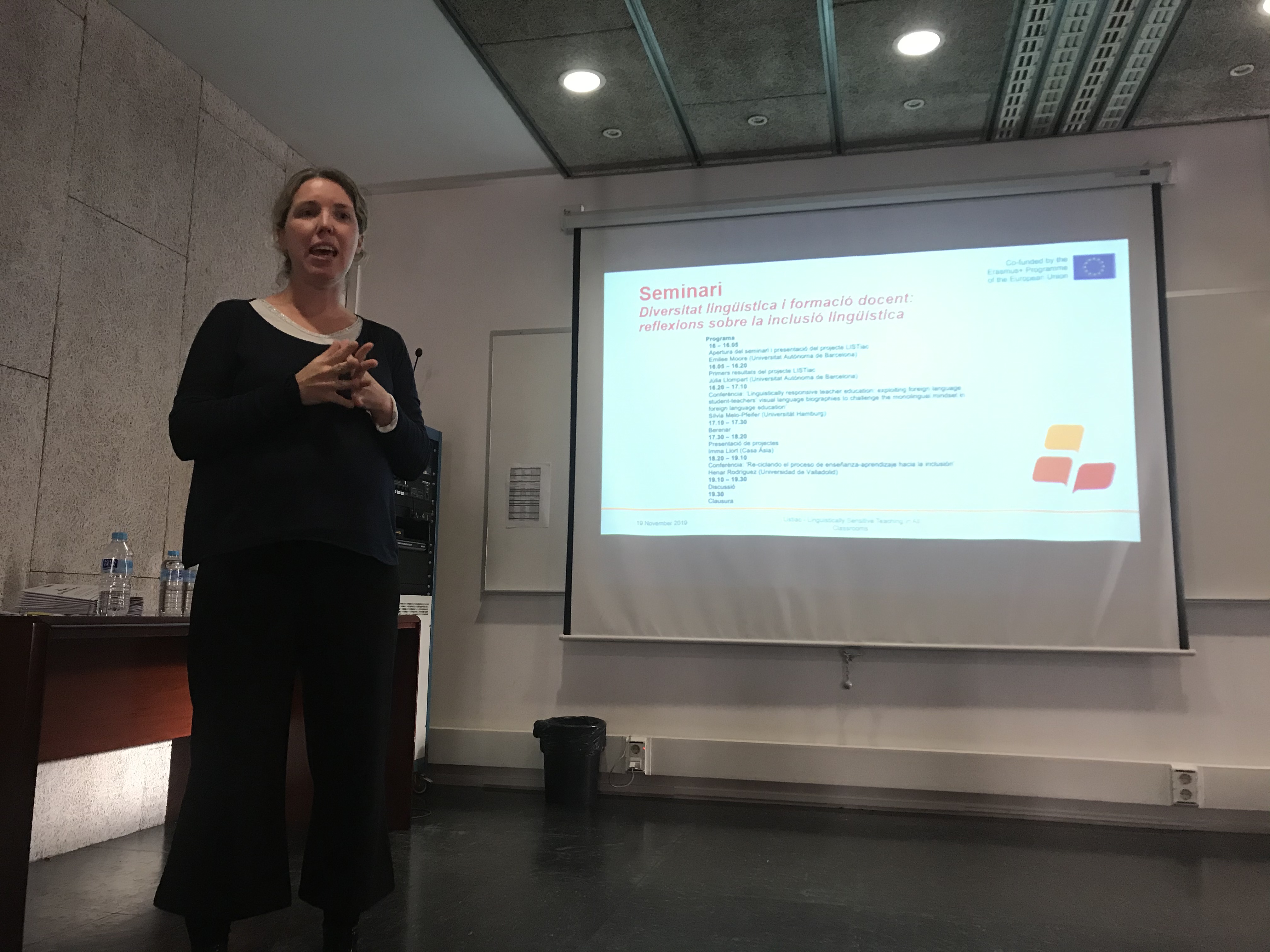 Lack of consensus among teacher educators – alternative terminology and concepts

Despite creating these new spaces to discuss issues related to linguistic and cultural diversity in the classroom with pre-service teachers, these topics are still quite new and evolving and there is a lack of consensus among teacher educators – outside of the two specific subjects mentioned above – about certain aspects of them. For example, our research suggests that there is not yet a common understanding about the relevance of these issues for mainstream education and non-language classrooms, or about the terminology used. Although some teacher educators do include issues regarding linguistically sensitive teaching (LST) in their classrooms, there are a range of terms used and several interpretations of those terms.

During our fieldwork, although we have presented our project to participants using the term LST, teacher educators have engaged in reflections on reaching a common understanding based on their previous ideas and related terminology. At the beginning of the fieldwork a clear question by one of our colleagues struck: What exactly is LST? Since then special attention has been taken regarding how this new term in our context would be understood and who the teacher educators see as having core responsibilities for developing LST.

During the first phase of the fieldwork (first meetings and sessions), many different terms and ideas appeared: plurilingualism (sometimes more related to what the Catalan Linguistic and Social Cohesion Plan proposed), translanguaging, language diversity in schools, being linguistically sustainable, linguistic mediation, global competence and multicultural competence (OECD, PISA), and inclusion. They were suggested as options to change the LST term for local use in the project. Although the latter term –inclusion– is widely used in our ITE program, the existing misunderstanding that language was not part of it was very clearly expressed. That is, inclusion is often connected to special educational needs such as learning disorders or disabilities.

Even more relevant than this wide range of terms is the fact that the responsibility for carrying out LST was allocated to pre-service teachers in their future classes and also to those teacher educators who specialised in plurilingualism, but not to other teacher educators related to language somehow or those of other subject areas. Moreover, some tension has been observed in some cases regarding LST and Catalan, a minority/minoritised language. In one teacher educator’s words: ‘I want to be inclusive, but we must fight for the survival of Catalan’. 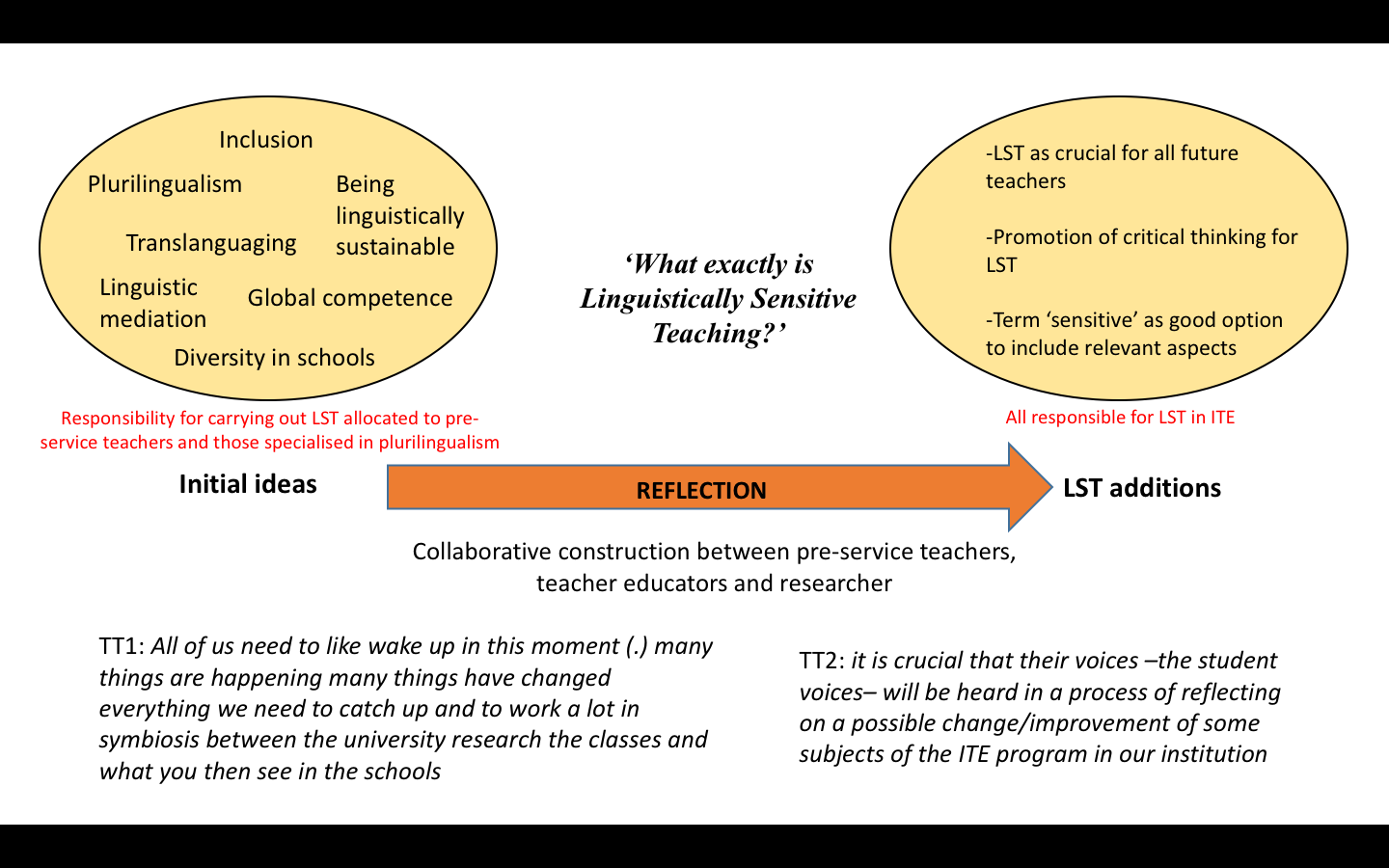 For six months we have been working together with pre-service teachers and teacher educators regarding LST, mainly through reflection using the materials proposed by LISTiac. The reflection was definitely enriched by including pre-service teachers’ voices – often quite critical regarding the lack of training they think they have [see Llompart & Moore (2020), for more detail]. Thanks to this reflection, we have observed a collaborative construction of a new understanding of LST, as well as a way to bring the Inclusion Law into the language sphere for ITE in our context.

We have constructed an understanding of LST which could include the previously mentioned terms, but also take into account:

Regarding the responsibility for carrying out LST, at the end of the reflection process teacher educators were clearly including themselves in it, both in taking into account other languages spoken by their students and also in being aware of the presence of the first generation of pre-service teachers in our ITE program from migrant backgrounds.

All in all, the introduction of the concept of LST in our context has served as an umbrella term which has allowed for the collaborative construction of a wider view of what is relevant in teacher education in response to the linguistic and cultural diversity of our world today. As one of our colleagues commented during one of the reflections: ‘All of us need to like wake up in this moment (.) many things are happening many things have changed everything we need to catch up and to work a lot in symbiosis between the university research the classes and what you then see in the schools.’